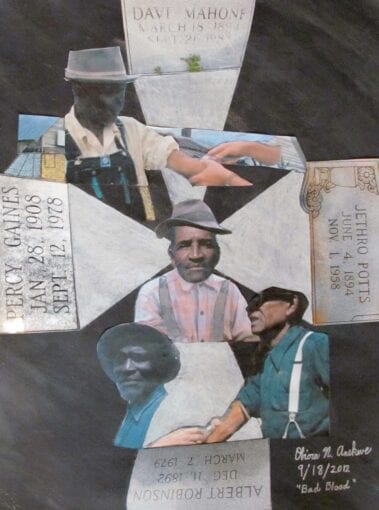 I was born in the John A. Andrew Memorial Hospital in 1974 where the Tuskegee Syphilis Study took place. I have had a lifelong curiosity about the ethics of the study and a desire to bring healing to communities such as Tuskegee. I want to be able to help vulnerable populations, people who are sometimes voiceless and cannot speak for themselves. My new book, Ancestral Voices Rising Up: A Collage Series on the Tuskegee Syphilis Study, translates the themes of the Tuskegee study while simultaneously discussing ethics, philosophy, and bioethics in a way that everyone would understand.

During the process of creating these works, I came to see the connectivity among similar unethical trials such as those conducted on mentally disabled children at the Willowbrook facility in Staten Island and on Holocaust victims at Auschwitz. I integrated photographs  from my travels to Auschwitz and the African Burial Ground National Monument in Manhattan into my collages about Tuskegee to document the commonality between human suffering and global injustice.

Obiora N. Anekwe, Ed.D, M.S., is a recent graduate of Columbia University’s Master of Science in Bioethics program. He is a New York City Teaching Fellow.