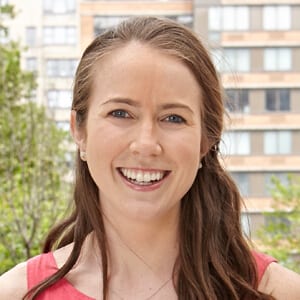 Carolyn P. Neuhaus explores philosophical and ethical questions that arise throughout biomedical research and medical practice, from the philosophical foundations of the use of animals in biomedical research to the development of digital medicine and use of AI in healthcare. She is currently engaged in research in The Hastings Center’s Humans and Nature and Science and the Self project areas.

Dr. Neuhaus’s work has appeared in JAMA, American Journal of Bioethics, and the Cambridge Quarterly of Healthcare Ethics, among other journals.  She also frequently writes for bioethics blogs and news outlets. She is a member of the American Society for Bioethics and Humanities, the International Neuroethics Society, the American Philosophical Association, and the New York Society for Women in Philosophy.

Prior to joining The Hastings Center, she was Rudin Postdoctoral Fellow in the Division of Medical Ethics of NYU School of Medicine under the mentorship of Arthur Caplan, a Hastings Center Fellow. Her postdoctoral research focused on the use of genome editing tools, such as CRISPR, in nonhuman organisms for public health purposes.

“Get the Public Involved in Chimera Research at NIH” Bioethics.net, August 15, 2016

“Get Out of the Way of Human Genetic Engineering? Unwise and Uncalled For” (with Arthur L. Caplan), Forbes, June 7, 2016.

“Worth the Money? Paying to Ensure a Representative Cohort in the Precision Medicine Initiative” (with Lisa Kearns and Arthur L. Caplan). Health Affairs Blog, July 30, 2015.